Search teams swarmed to the Mar Mikhael area, a neighborhood near the epicenter of last month's blast, on Thursday after rescue teams detected movement deep within debris, according to Lebanon state-run NNA news.Video from the scene showed rescuers working under floodlights to remove portions of a wall with a crane as a crowd stood by, waiting for updates.The search was sparked by a rescue dog that passed the destroyed building with a Chilean rescue team on Thursday and indicated signs of life, said Eddy Bita, a local non-governmental organization worker. Thermal imaging later showed two bodies — one small body curled up next to a larger body. A listening device also registered a respiratory cycle of 18 per minute, Bitar said. "There's a small chance that the person is still alive," Bitar said. Rescue teams are digging tunnels through thick concrete debris to reach the site of the potential survivor. Francisco Lermanda, a worker with Chilean search and rescue NGO Topos Chile, was cautious about the prospect of finding someone alive after so many days beneath the rubble. But he didn't rule it out.One person survived 28 days under rubble in Haiti, he added.Thursday's search was temporarily suspended over concerns that a wall could collapse and endanger the lives of the rescue team, Beirut fire brigade officer Lieutenant Michel El-Mur said. A crowd that had gathered at the site were upset with the decision to call off the search. A few people climbed on top of the rubble, attempting to continue searching themselves.One woman was heard saying: "We have been here for a month, can't you stay up for one night?" Others told the rescuers that they didn't "want the truth" and that they would take matters into their own hands.The explosion tore through Beirut's port on August 4, killing 190 people, injuring more than 6,000, and leaving more than 300,000 displaced from their homes. It was linked to nearly 3,000 tonnes of ammonium nitrate which had been stored at Beirut's port for six years. Ammonium nitrate is a highly volatile material used in agricultural fertilizers and explosives.After the explosion, Lebanon's Prime Minister Hassan Diab said it was "unacceptable" that the shipment of ammonium nitrate had been stored in a warehouse on Beirut's port for six years. But documents suggest that multiple government agencies in Lebanon were informed about the presence of theammonium nitrate — including the Ministry of Justice. 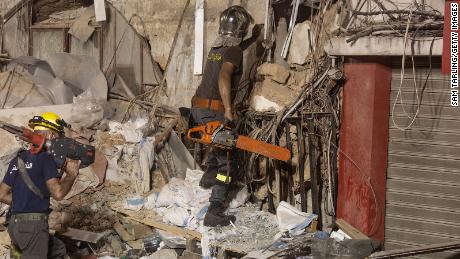 The explosion sparked fury in Lebanon, where the government has been plagued by accusations of corruption and gross mismanagement, and plunged the country even further into economic turmoil.Following the blasts, Beirut was rocked by Read More – Source

One month after Beirut blast, rescuers find signs of life amid the rubble

Trump Says He Has Not Seen Proof of Navalny Poisoning, Awaits Results From Germany

Trump Says He Has Not Seen Proof of Navalny Poisoning, Awaits Results From Germany