How US elections work 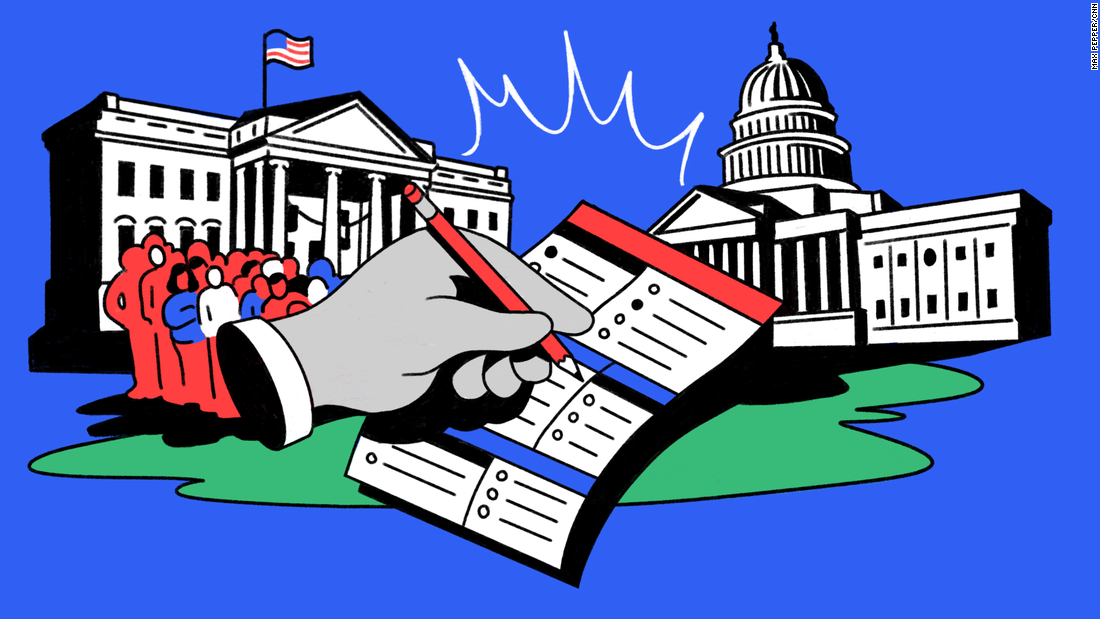 Lee este artículo en español.We pulled the top global search queries about US presidential elections. Here's what you should know about what's happening with the 2020 election and how it all works.

When does the US election start?

Great question! Short answer: Election Day, as set by US law, is always the first Tuesday after the first Monday in November. This year that's November 3.Better answer: a few weeks before November 3. A lot of people in the US vote early or by mail, and more than ever will do so this year because of the Covid-19 pandemic. Best answer: It's been going on for months already. The presidential election starts with a primary process for the major political parties, Republicans and Democrats, to pick their nominees (Donald Trump and Joe Biden this year). The primaries that determine those candidates started in early 2020 and were mostly wrapped up by summer. Also important: There are a lot of other important elections going on at the same time as the presidential race. Voters will pick all 435 members of the US House of Representatives, who are in office for two-year terms. Voters in some states will also vote for US senators, who serve six-year terms. The party that controls those two houses of Congress has a lot of power in Washington, so they're important in terms of what the newly elected (or reelected) president can accomplish.

When does the US election end?

Short answer: November 3 — though the last polls will close in Alaska after midnight Eastern Time. Better answer: when all the votes are counted.Best answer: Given the move to mail-in voting with the pandemic this year, figuring out who won the election will probably take more than a day. It could always be a blowout that's immediately apparent. But neither side is going to admit defeat until they're absolutely sure they've lost. (Flashback: Al Gore actually called George W. Bush to rescind his concession in 2000). A close election could drag on for days or even weeks as states wait for ballots to trickle in and perform any necessary recounts before certifying their results. In 2000, the winner wasn't entirely clear for more than a month.

Why is the US Election Day on a Tuesday in November?

It's not in the Constitution, but it is a matter of law. Congress set the date back in 1845.

Can the election be postponed or changed?

That's been an interesting question this year with the pandemic. Since Election Day is set by law, it would take an act of Congress and the OK of the President to postpone or change the date. That doesn't seem likely.

This is a very good and complicated question, especially since Republicans and Democrats have been fighting this year about ballot access.The easy answer is that the 26th Amendment set the voting age at 18 and US citizens over that age can have their voices heard.But there is so much more to it. First, voters don't directly elect the president. That's done by the Electoral College, which includes representatives — electors — from each state who cast ballots according to the popular-vote result. So regular citizens go to the polls to decide who will get their states' electoral votes. (More on that a little later.)The rules are different in each state and can even vary within states.It's notable that in recent years, a series of new state laws have sought to make it more difficult to vote. The laws' advocates cite concerns about fraud, though studies find that voter fraud is extremely rare. They've pushed ID requirements in some places. They've tried to purge voter rolls. Opponents have complained these restrictions are a form of voter suppression.Related: Who can vote in US electionsPrisoners can vote in Vermont and Maine, but not elsewhere. An effort to reenfranchise felons in Florida was approved by voters in 2016, but then slow-walked by Republicans who run the state government there.Add to that the stain of slavery and repression, which kept people of color from voting, first as slaves and later through literacy tests and poll taxes. Also add that women could not vote in every US state until 1920.Plus, there are territories. Puerto Ricans are US citizens, but the territory has no Electoral College votes — so people registered there have no say in the November presidential election, although they can vote in party primaries.

What is on the ballot?

Short answer: Most Americans vote for president and Congress, but November ballots will also include state and local elections, so they will differ from city to city and state to state.Long answer: Every person voting in a US state can vote for president. But the options will be different depending on the state. Biden and Trump will be on every ballot, but there will be other smaller party options that vary depending on a state's rules.Everyone voting in a US state will also vote for a member of Congress, with some exceptions. Residents of Washington, DC, elect only a nonvoting delegate to Congress. Residents of Puerto Rico also elect only a nonvoting delegate to Congress.US states each get two senators — whether their population is teensy like Wyoming or massive like California. But the senators are in six-year terms, so only about a third of them are on the ballot in any given year. Some states will pick governors this year, and others won't. Most ballots will also have some combination of state and local races. Some states have ballot initiatives and ask their residents about all manner of questions, plus some people will be asked to vote on local initiatives as well. Again, they're all different.Go to your local government or your state secretary of state for a sample ballot.

How are US senators elected?

They're elected by popular vote within a state. But that's not how the Constitution first envisioned it. Senators used to be selected by state legislatures. The framers wanted to protect senators from public opinion. But it turned out to be a horribly corrupt practice and it took more than 100 years of effort to change the Constitution in 1913 with the 17th Amendment, which mandated the people should choose their senators.

How are members of the US House of Representatives elected?

They're elected by popular vote within congressional districts. But it's worth mentioning that not all congressional districts are drawn equally. The census, which is conducted every 10 years (including in 2020), determines how many congressional districts each state gets. Political parties have long tried to game the drawing of their districts within states to their advantage. Political parties have often helped solidify their majorities in states and protect incumbents with creatively drawn districts. The process of drawing weird lines to favor one party, known as gerrymandering, has been the subject of numerous court cases. Other states have tried to make it more fair by adopting nonpartisan or bipartisan commissions to redraw district lines.The population disparities in the country have gotten a bit ridiculous. Wyoming's sole congressional district has fewer than 600,000 people. A district in California or Texas will have more than 700,000.After the 2020 census, there will be a "reapportionment" and some states may lose or gain seats in the House depending on population changes.

How is the US president elected?

This gets complicated! Each state conducts its own election, but they all feature the Republican and the Democrat on their ballots. So while there is no technical rule that the election is between these two parties, that is effectively the case. The parties pick their nominees during a series of primaries, usually beginning in January of the general election year. From there, the timeline is set:All the states conduct their general elections on the first Tuesday after the first Monday in November. Then, electors — the people who will vote in the Electoral College — are chosen based on the victor in the statewide election.The states' electors meet in the state capitals on the first Monday after the second Wednesday in December — this year, that's December 14 — and cast their ballots for president and vice president. They then send those off to CapitRead More – Source

Press freedom in Iraq: Why some journalists are receiving death threats

Press freedom in Iraq: Why some journalists are receiving death threats