US reports on new anti-Russian sanctions are first and foremost designed to appease lawmakers in Washington, the head of Russia’s upper house Committee for International Relations, Konstantin Kosachev, has stated.

"Alas, there is nothing new in this report. The law [on Russian sanctions] has already been adopted, the process has been gaining momentum, and the relations driven into a deadlock with no signs of light at the end of the tunnel," the senator told RIA Novosti.

The US Treasury Department is currently finishing its first official list of the business elite supposedly close to Russian President Vladimir Putin’s government, Bloomberg reported on Friday. It quoted a spokesman as saying that the Treasury’s terrorism and financial intelligence unit is working with the State Department and Office of National Intelligence to complete the report, set to be released before January 29.

“It should be released in the near future,” Treasury Secretary Steve Mnuchin reportedly said at a White House briefing. “It’s something we’re very focused on.”

The US administration is burning the midnight oil trying to finish and submit to Congress the so-called ‘Kremlin report’ – a list of high-ranking Russian officials and businessmen allegedly close to the government, reports Kommersant daily.

This type of step is required by the ‘Countering American Adversaries Through Sanctions Act’ that Donald Trump signed in August of last year. The US president said the bill “represents the will of the American people to see Russia take steps to improve relations with the United States.” The sanctions targeted a range of entities and individuals – including Russia’s energy sector, banks and weapons manufacturers, as well as those the US accuses of interfering in the 2016 presidential election.

According to Kosachev, the upcoming sanctions list is meant to push Trump toward more action, because the US president’s opponents are using any pretext to accuse him of failing to comply with the Sanctions Act, and therefore of “indulging Russia, [that is] aggressive and posing a threat to US security.”

Details of the report have not yet been disclosed, but according to Kommersant sources in Washington, the new sanctions list could involve more than 50 individuals (in the worst case scenario, up to 300 people, including the targeted persons’ family members). A source in the US State Department told the newspaper that the document would be prepared “on time.” 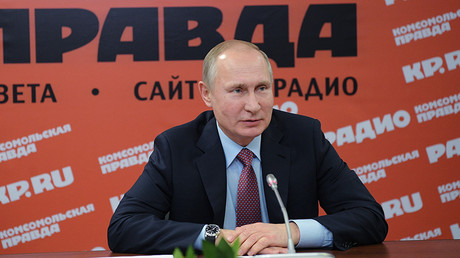 On Wednesday, US members of Congress released a 200-page report on the Kremlin's "asymmetric attacks" on democracy and their alleged consequences for the United States.

Russians are everywhere, and everything they do is an existential threat to democracy and the American way of life, according to the report published by Senate Democrats on behalf of one of the most outspoken Russia hawks.

The report, compiled by Democratic staffers of the Senate Foreign Relations committee, was commissioned “shortly after the 2016 election” by ranking member Senator Ben Cardin (D-Maryland). Many of its sources are individuals and media outlets with a known anti-Russian bias.

Entitled ‘Putin’s asymmetric assault on democracy in Russia and Europe: Implications for US national security’, the report alleged that there has been a “20-year” campaign to undermine democracy led by the Russian president personally.

Kremlin spokesman Dmitry Peskov said on Friday that Moscow would adequately respond to any possible new sanctions from the US. He stressed that the Russian reaction will be based on the principle of reciprocity. The countermeasures will reflect what “best meets our interests," he said.

“There is no doubt about it, and, of course, the decision will be taken by the Russian president," Peskov added.

Putin's spokesman also noted that a number of different lists have been previously published by the media, "but they all turn out to be fake," adding that the best thing to do is to wait for the document to be presented by the US State Department.