Executive Deputy Mayor Ian Neilson said in a statement on Monday that the agricultural sector, which uses the same supply system the city draws its water from, has used its allotment, resulting in a drop over the coming weeks. Neilson added that the fall did not signal an end to restrictions for residents of the nation's second most-populous city. "Capetonians must continue reducing consumption if we are to avoid Day Zero. There has not been any significant decline in urban usage. All Capetonians must therefore continue to use no more than 50 liters (around 13 gallons) per person per day to help stretch our dwindling supplies," the executive deputy mayor added.New emergency water restrictions went into effect last week for the city that once was considered to be at the forefront of Africa's green movement. Only a month ago, level six restrictions had placed residents on a daily allowance of 87 liters (about 23 gallons), illustrating the severity of the crisis. Experts are keeping a close eye on daily consumption in a desperate bid to avoid the disaster, warning residents tempted to ignore measures that they face fines and the installation of water-management meters if they do not comply. The movement of Day Zero to mid-May offers Capetonians some hope as historically, the rainy season should have arrived by then. "This is a welcome decline in water usage and gives Cape Town and some of the other municipalities hope but importantly, we need to get our consumption down to 450 million litres per day to prevent the remaining water supplies running out before the arrival of winter rains. We cannot accurately predict the volume of rainfall still to come, or when it will come," Neilson said.

Typically, winter cold fronts driven by strong westerly winds bring replenishing rains to Cape Town. But the past few years have been anything but typical. "An expansive area of high pressure situated in the Atlantic Ocean is acting as a barrier to these weather systems," CNN meteorologist Derek Van Dam says. "As this high-pressure system strengthens and expands, it pushes rainfall away from the Western Cape." 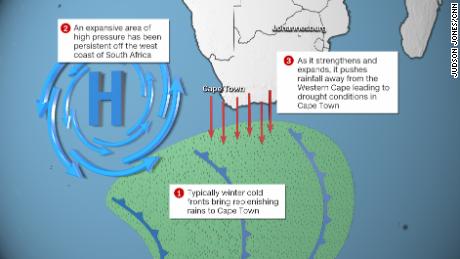 This area of high pressure has been unusually strong over the past three years and the result has been three years of drought, including their two driest years on record in 2015 and 2017. This increase in drought frequency and severity is an expected consequence of a warming planet. According to the Intergovernmental Panel on Climate Change's fifth assessment report, long-term climate models indicate a significant drying trend will continue across western portions of South Africa, possibly reducing annual rainfall by up to 40%. 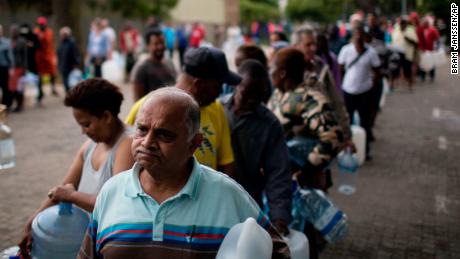 The city is now working to upgrade its water systems — rushing to build desalination, aquifer and water-recycling projects — and help stretch the current supply. But officials say residents also need to step up. Only an estimated 55% of the city's residents are actually sticking to their allotted water per day, according to last week's figures. But residents say they are already struggling to keep with existing restrictions. Photographer Melissa Delport, who lives in Seapoint, Cape Town, is one of those who has been queuing at a local natural spring to collect water. 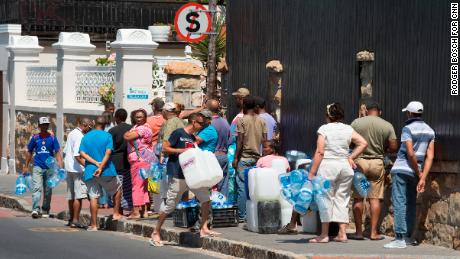 "We have reduced showers to twice a week and we shower in buckets with a face cloth," she told CNN. "We are reusing water where we can and using gray water to flush the toilet." "I am privileged enough to have a car and drive to natural springs coming off the mountain to go and catch water in drums," Delport said."Although there are queues it could be worse. Many of the poorer communities have it much worse and have for a long time."

What happens if 'Day Zero' comes?

Last week, satellite images showed Theewaterskloof Dam, Cape Town's largest reservoir, at dangerously low levels. Accounting for over half of all water in the region's dam system, it offered a glimpse into the extent of the deepening problem. Should the government declare "Day Zero" has arrived, faucets will cease to deliver water until the skies open and rain falls. On this day, residents will be further rationed to just 25 liters (6.6 gallons), which they will be able to collect only from one of 200 stations. To put that into perspective, each collection point will have to accommodate the water needs of 20,000 Capetonians. Key institutions — such as schools and hospitals — are expected to continue receiving water, according to officials, who have said contingency plans have been made. But questions dominate everyday conversation around the city's wider strategy for the general population, which authorities are yet to publicly outline. Given this stark outlook, there are concerns neighbors could turn on each other and fears of unrest erupting the longer the crisis continues.