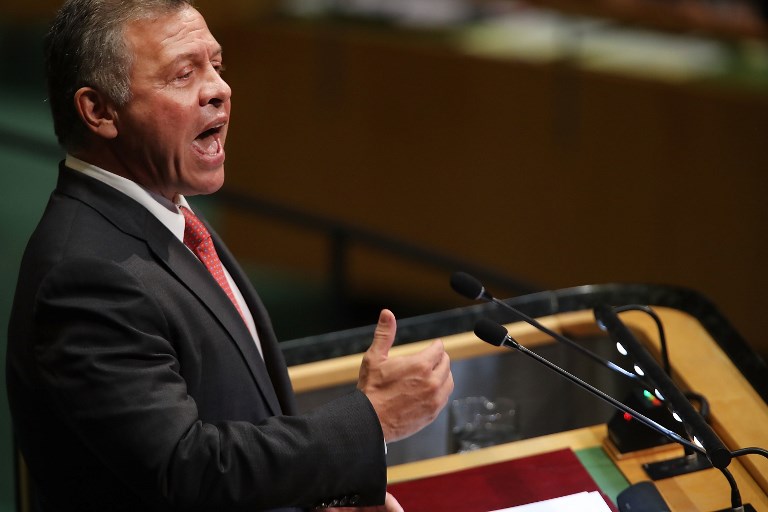 Calls for reforms in Jordan

More than 100 prominent figures in Jordan have called on King Abdullah II to institute reforms and have accused him of ignoring previous calls for change, chosing instead to lead the country in the wrong direction, according to a report in news site Arabi21.

In a statement, the figures – including former ministers, military and political leaders – said that constitutional amendments made in 2014 gave the king exclusive powers beyond those he already held and have led to "worsening corruption which has prevailed on a large and open scale".

With these news powers, thousands of officials in the the Royal Court and other governing bodies have been acting above the law, the statement added.

The signatories called for a new phase for Jordan which will provide for a "national project with clear objectives and means" based on shared principles and goals.

The statement highlighted that the Royal Court must be subject to the law and the Audit Bureau.

The king, too, they said, should not leave the country without approval of the Council of Ministers and must specify his destination, the amount of time he will spend abroad, the purpose of the travel and its cost.

Although there are frequent calls for reform in Jordan, this is the first time in Jordan's history such claims have been made.

Mysterious boxes taken out of Saudi Consulate in Turkey

Turkish investigators looking at footage from security cameras at the Saudi consulate in Istanbul saw men transferring boxes from inside the building to a black car following the disappearance of Saudi journalist Jamal Khashoggi last week, London-based al-Quds al-Arabi reports.

Khashoggi vanished last Tuesday after he entered the consulate to obtain paperwork so he could remarry.

Turkish officials accused Saudi authorities of killing the 59-year-old journalist inside the consulate using a special force sent from Riyadh, the newspaper reported.

On Saturday, the Saudi Consul General in Istanbul, Mohammed al-Otaibi, invited journalists into the consulate to prove that Khashoggi was not there and said that reports of his detention are false.

Western and regional countries have refused to take part in Syria's reconstruction until a UN-led political process leads to "genuine and irreversible" political transition in the country, reports Saudi newspaper Asharq al-Awsat.

Nine countries, including the US, and the European Union shared their stance in letters sent to UN Secretary-General Antonia Guterres which were seen by the newspaper.

A two-page European document, purporting to share the position of Western countries, said there would be no aid for the country's reconstruction and instead supports the UN position which calls on agencies operating in Syria and the international community not to deal with parties "involved in war crimes", the paper reported.

Donor states, the document said, should deal directly with local communities and families in Syria to offer UN assistance.

Jordanian authorities have issued a decision to close a Dead Sea hotel after finding bacteria in the water because used by the guests to shower, according to the Jordanian newspaper al-Ghad.

One-hundred and sixty-four mostly foreign guests were evacuated from the 140-room hotel and bookings were stopped.

The authorities in Jordan have not said when the hotel will reopen, or whether anyone was infected.

*Arabic press review is a digest of reports that are not independently verified as accurate by Middle East Eye.