Brexit REBELLION: 40 Tory MPs set to go on STRIKE as May faces no confidence vote

MPs from Remain and Leave-supporting wings of the Prime Ministers warring party have rounded on her over her so-called Chequers proposals to leave the EU.

The PM is hoping to secure a deal with the EU and win the backing of her cabinet in order to announce the withdrawal terms at a special summit at the end of November.

But the biggest hurdle for her deal may prove to be MPs from her own party, whose deeply divided stance on the EU is threatening to derail Brexit completely.

Once a withdrawal deal is agreed with Brussels, Mrs May needs to gain the approval of MPs in a vote on the final deal presented to the House of Commons.

The PM will struggle to get a Brexit deal based on her Chequers proposals through the Commons, two ministers have told the BBC. 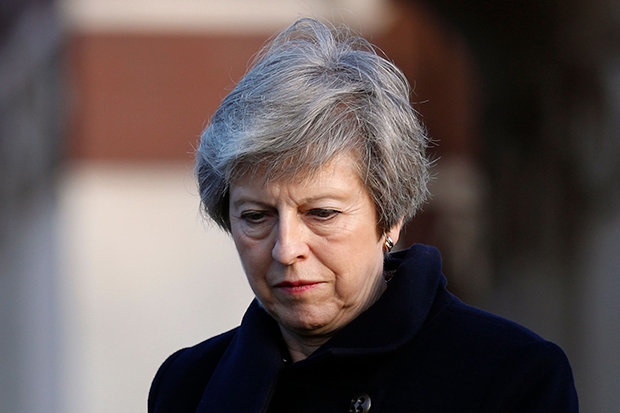 REBELLION: Up to 40 Tory MPs are ready to 'go on strike' over Brexit (Pic: GETTY)

Senior members of her team reportedly described sections of her plan as "worrying", "disappointing" and "concerning" months ago.

As many as 40 Brexit-supporting Tory MPs are prepared to “go on strike” if Mrs May holds parliamentary a vote on her Brexit deal, transport secretary Chris Grayling has reportedly told his colleagues.

Sources close to Grayling told the BBC he has been “extremely cautious” about the PMs Chequers plan from the outset.

Meanwhile, Remain-backing Tory MPs are reported to be plotting a coup to remove Mrs May from Downing Street through a no confidence vote.</span></span>

“If the cabinet mutinies it will make little difference”

They are prepared to join Eurosceptic Tory MPs in sending letters of no confidence to chairman of the influential 1922 committee, Graham Brady, according to The Sun.

Mrs May and her Brexit plan is clearly “the problem”, one angry Tory MP said.

The EUs chief Brexit negotiator Michel Barnier will update ministers from European Union nations on the state of the negotiations as domestic pressure on Mrs May intensifies.</span></span>

Boris Johnson claimed Mrs May is on the brink of "total surrender" to the EU over Brexit as he urged the cabinet to mutiny against the PM's withdrawal agenda.

And another Brexiteer former cabinet minister, John Whittingdale, said it was difficult to see how Mrs May's premiership could continue if MPs rejected any Brexit deal she brought back to parliament.

Pro-Brexit Commons Leader Andrea Leadsom added to Tory tensions by insisting the UK could not be "trapped" in a backstop agreement without the ability to leave at a time of its choosing.</span></span>

Former foreign secretary Johnson suggested that if Mrs May's plans for a backstop customs deal with the EU – aimed at preventing a hard border in Northern Ireland – went through, the UK could be reduced to the status of a colony.

In a stinging attack on the PM's proposals ahead of a cabinet meeting on Tuesday, Johnson said Mrs May's agenda would see the UK "remain in captivity".

"The awful truth is that even if the cabinet mutinies – as they ought – it will make little difference,” Johnson wrote in the Telegraph.

"Even if we agree with the EU that the UK must have a unilateral break clause, so that we can go our own sweet way at a time of our own choosing, it is irrelevant because the programme and ambition of the government is to remain in captivity, to stay in our cell, even if we are given the theoretical key to escape."</span></span>

Trump to Democrats: If You Are Going to Impeach Me, Do It Now, Fast