Will the world help the Rohingya to attain justice?

Just over a year ago, many of our Rohingya brothers and sisters endured what the UN now says constituted genocide.

Tens of thousands were slaughtered by the brutal Burmese military, which stripped them of their citizenship decades earlier, and hundreds of thousands fled for neighbouring Bangladesh, where most now remain in makeshift camps in Coxs Bazar.

Yet, there has been no accountability for these horrific crimes, which continue to be committed against other ethnic minorities throughout the country.

The brutal Burmese regime – including Nobel Peace Prize laureate Aung San Suu Kyi – insist that their own commission of inquiry will do the job. But we all know that perpetrators can never be trusted to deliver justice for their victims, especially for crimes of this scale.

This week, the situation may finally change. In September, the UNs Human Rights Council agreed to establish a new independent mechanism to investigate these crimes and to prepare cases for prosecution. This was a massive step forward, and the most concrete signal this year that the international community will no longer stand idly by in the face of genocide.

By the end of this year, we will know whether the Rohingya people will be able to start to see the justice that they were promised, and that they so rightly deserve

It was also a sign that the international community understands that justice is an important precondition for any returns to Myanmar – but as recent events have shown, we are a long way off from being able to do this in a safe, dignified and voluntary way for those involved, with guarantees that their citizenship will be restored.

The new mechanism must be fully funded to work. The UN has said that it needs around $27m to satisfy its mandate. Unfortunately, some countries are trying to use this weeks annual UN budget negotiations in New York as an opportunity to cut down that funding, and in the process gut the mechanism before it even gets started. This cannot be allowed to happen.

As important as the new mechanism will be, it is only part of the process for delivering justice for these crimes. The best route is for the UN Security Council to refer Myanmar to the International Criminal Court, ensuring that the full force of international law can be brought to bear.

This is the worst fear of the Tatmadaw military commanders who ordered and conducted the killings, and the one thing that may actually get them to stop. 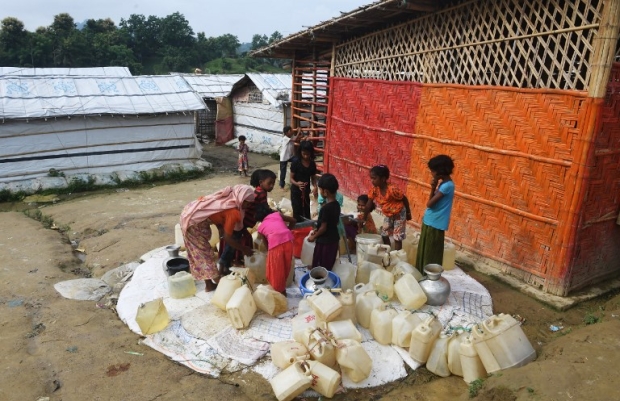 While some members of the Security Council, such as Sweden and the Netherlands, have called for a referral to the International Criminal Court – and others, such as the UK, would likely be supportive – the politics of the five permanent, veto-wielding members remain divided, as ever.

Whether a country such as China would be prepared to stand with a genocidal regime and veto any such resolution remains to be seen – especially given the ire this would bring from the Islamic world.

The UN Security Council was established to protect international peace and security. While we must continue to push for it to do its job, we must also not let this critical diplomatic moment disappear.

The international community must consider additional options, such as establishing a special tribunal as we saw in Yugoslavia or Rwanda, and which the General Assembly may be able to mandate in its own right. This would be the natural next link in the investigative chain.

World should be watching

Sanctions must also be ramped up, especially on the militarys economic interests, and it was pleasing to see the European Union this week foreshadow additional steps in this regard.

Rohingya Muslims need the world to prevent another slaughter

By the end of this year, we will know whether the Rohingya people will be able to start to see the justice that they were promised, and that they so rightly deserve. But in order for this to be the case, the UN General Assembly must fully fund the new investigative mechanism.

The eyes of the world should be watching the halls of the General Assembly this week.

– Nurul Islam is the chairman of the Arakan Rohingya National Organisation (ARNO), a political network that campaigns for the rights of the Rohingya. A native of Rakhine State, Islam served as the president of the Rangoon University Rohingya Student Association in 1971.

– Kyaw Win is the executive director of the Burma Human Rights Network (BHRN), which works with individuals on the ground to document human rights violations, breaches of religious freedom, and the spread of hate speech and anti-Muslim violence across the country.

The views expressed in this article belong to the authors and do not necessarily reflect the editorial policy of Middle East Eye.

Photo: A young Rohingya refugee spreads out firewood to dry on the roof of a shack in Bangladeshs Coxs Bazar district on 18 November (AFP)