Tory leaders debate LIVE: Boris Johnson takes on rivals in race to be next PM

The former London Mayor, who surged ahead earlier today with 126 votes from fellow Tory MPs, has been accused of dodging questions and publicity in the race so far.

The ex-Foreign Secretary is known for his lively and sometimes controversial speeches, and even the occasional gaff – making his appearance tonight highly anticipated.

"Thank you to those who supported me in the second ballot. Very much look forward to taking part in tonights BBC debate," he tweeted at 6.50pm.

“We must come out [of the EU] on the 31st of October,” he said in his opening remarks on the show today.

If Brexit didnt happen he said there could be a “crisis in politics” as people are “getting fed up with politics”. 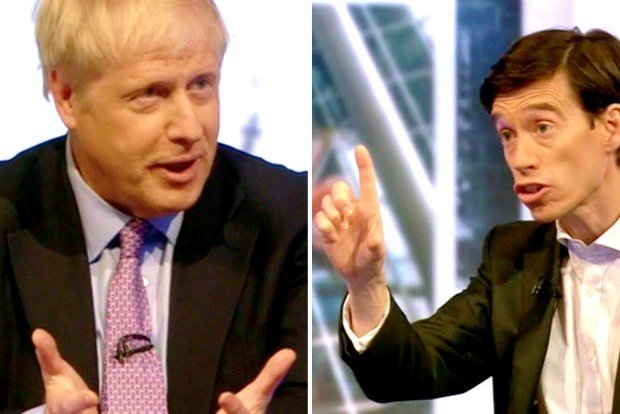 The BBC debate features the leadership contenders sitting in a semi-circle while taking questions from presenter Emily Maitlis and members of the public.

The Brexit didnt happen he said there could be a “crisis in politics” and people are “getting fed up with politics”.

Shortly before the results of the vote were announced today, Maitlis had joked on screen that all of the candidates might not show up.

“We've set out five chairs, but it might be that we only need four, or three… or one,” she said on the BBC News channel.

TORIES: If Sajid Javid dropped out the third round of voting would be avoided (Pic: GETTY)

EDGE OF THE SEAT: The seats had the candidates perched awkwardly (Pic: BBC)

Johnson is popular among Tory party Members – who largely back Brexit – but has solicited stiff opposition from moderate figures.

The results for Gove and Hunt were generally seen as disappointing, with them picking up fewer than a handful of votes each since the first ballot.

The big story was the surge in backers for International Development Secretary Rory Stewart, who came above Home Secretary Sajid Javid and ex-Brexit Secretary Dominic Raab, who was knocked out.