ECB needs a rocket scientist, not a rock star

HELSINKI — Central banking is rocket science. If you dont get it right, the consequences can be tragic.

Thats why EU leaders are taking a huge gamble in their decision to entrust the leadership of the European Central Bank to Christine Lagarde, a political rock star with no economic training and no practical experience of monetary policy.

Lagarde, currently the managing director of the International Monetary Fund, has many skills. A former international lawyer, shes also a skilled political player, a fluent communicator popular with the media and a pragmatic chairperson unencumbered by economic dogma. She is trusted by global leaders from Berlin to Beijing to Buenos Aires.

At a time when the ECB is running low on options for jolting the economy, Lagarde may have the acumen and authority needed to persuade reluctant, conservative Germany and the Netherlands of the urgent need to provide more fiscal stimulus, according to Jacob Kirkegaard, a senior fellow at the Petersen Institute for International Economics in Washington.

But by nominating the former French minister to succeed Italys Mario Draghi — the bold president of the bank who rescued the European economy in 2012 with a promise to do “whatever it takes to preserve the euro” — the EUs leaders have effectively decided that they dont need a central banker to run their central bank.

The main reason why Lagarde got the nod, instead of the experienced French central bank chief François Villeroy de Galhau, appeared to be gender.

The tightly knit central banking fraternity, which was expecting the candidate to come from within the ranks of eurozone national central bank chiefs, is aghast. As one insider put it: “Its as if were going from whatever it takes to whatever.”

That poses a serious risk in an era in which growth is slowing, inflation sits stubbornly below the ECBs target of just under 2 percent, interest rates are stuck at zero and the ECB is rapidly exhausting the supply of eligible government bonds it can buy to stimulate the economy.

The next ECB president may be plunged into fire-fighting within days of taking office on November 1 if a global trade war unleashed by U.S. President Donald Trump worsens, Britain crashes out of the EU without a withdrawal deal or Italys confrontation with Brussels over its budget deficit and excessive debt takes a turn for the worse.

The markets are already expecting Draghi to fire his final cartridges before then, by cutting the deposit rate for banks parking funds at the ECB deeper into negative territory and resuming a limited round of securities purchases to try to get inflation up closer to the banks objective.

The surprise choice of Lagarde, 64, was part of a Franco-German trade-off under which conservative German Defense Minister Ursula von der Leyen, 60, was nominated to head the European Commission, breaking a political deadlock in which all the original candidates fell by the wayside. 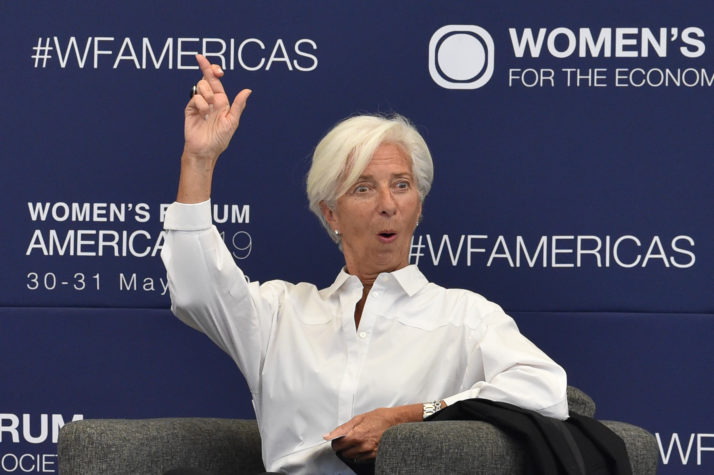 Managing Director of the International Monetary Fund Christine Lagarde (R) is pictured during the Open Ceremony of Womens Forum Americas in Mexico, on May 30, 2019 | Rodrigo Arangua/AFP via Getty Images

Under the package deal, outgoing liberal Belgian Prime Minister Charles Michel will be president of the European Council, chairing EU summits, and socialist Spanish Foreign Minister Josep Borrell will become the EUs foreign-policy honcho. All the appointments except Michels require approval by the European Parliament, which is not yet certain.

The main reason why Lagarde got the nod, instead of the experienced French central bank chief François Villeroy de Galhau, appeared to be gender.

For the first time, the sensitive choice of ECB chief was the adjustment variable in political horse-trading over other top EU jobs — even though the bank is meant to be strictly independent of politics. Moreover, Lagardes is the second appointment of a politician to replace a macroeconomic expert, after former Spanish Economy Minister Luis de Guindos replaced ECB Vice-President Vítor Constâncio last year.

With Frenchman Benoit Coeurés term on the executive board expiring at the end of the year, it piles enormous responsibility on the shoulders of newly appointed chief economist Philip Lane, who spelled out the ECBs utter determination to keep monetary stimulus going as long as necessary to meet the inflation target in a speech in Helsinki on Monday.

Coeuré is likely to be replaced by an Italian, raising the specter that Romes anti-establishment government may put forward a maverick rather than an orthodox central banker.

To be sure, the appointment is not without what some might regard as its advantages. A Lagarde-led bank is likely to be more collegiate, with the president acting as the mouthpiece for policy devised by Lane and the ECB staff and endorsed by the 25-member Governing Council, whereas Draghi took a decisive lead on his own at key moments such as his 2012 “whatever it takes” intervention, which was the turning point of the crisis.

And Lagarde does have crisis management experience. She served as Frances finance minister during the early stages of the eurozone sovereign debt crisis before taking the helm of the IMF in 2011 when Frenchman Dominique Strauss-Kahn — a path-breaking economist — resigned in disgrace after being charged with sexual assault.

“Because of her own rock-star qualities, she may be best placed to deliver the message in Berlin and the Hague that they must plow more of their surpluses into fiscal stimulus.” — Jacob Kirkegaard, senior fellow at the Petersen Institute for International Economics

But people who worked with Lagarde in Paris and Washington say she is a skilled spokeswoman for others policy rather than an original economic thinker like Strauss-Kahn.

Despite being feted by the Financial Times as “finance minister of the year” in 2009 and starring on the covers of glossy business magazines, her record is open to question.

Iran Guards chief: We have closed the military path for the enemy