Not even a liter of vodka: Italys Salvini denies receiving any funding from Russia

Italian Deputy PM Matteo Salvini has denied receiving funding of any sort from Russia after BuzzFeed published a report alleging a shady deal between Italians and Russians to fund his party with Moscows “oil money.”

“Ive said this before, but Ill it repeat it today, tomorrow and the day after – Ive never received any funding from Russia, not a single ruble, dollar, euro – or even a liter of vodka,” Salvini stated. 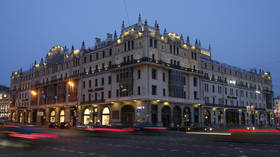 The report, published on Wednesday, is based on a lengthy text, said to be a transcript of an audio allegedly recorded on October 18 last year in the lobby of Moscows Metropol Hotel. Three Italians and three Russians, were discussing a rather shady fuel deal, designed to sustain a “political campaign.”

BuzzFeed alleges that the campaign in question was the European elections, held this May. Still, it is not very clear what “political campaign” exactly the participants of the supposed meeting were discussing from the transcript itself.

One of the negotiators is identified in the report as Gianluca Savoini – a senior aide to Salvini, yet all the other men are not named. Savoini himself has dismissed the report as well.

“Its yet another political attack that is absolutely baseless. Weve never received a single ruble from anyone. Thats why its just empty talk,” Savoini stated.