No one alive under rubble of building 30 days after blast, Beirut search team says

The blast of nearly 3,000 tons of ammonium nitrate tore through the Lebanese capital on August 4, killing 190 people, injuring more than 6,000, and leaving more than 300,000 displaced from their homes. The blast destroyed much of Beirut's eastern coastal area.Rescue teams on Thursday began searching for a possible survivor in the the Mar Mikhael area near the epicenter of the blast after detecting movement deep within debris on Wednesday.The thought that one more person may have survived the blast had became a glimmer of hope in the downtrodden city. As in much of Lebanon, there is widespread dissatisfaction with the scandal-hit government and frustration with the struggling economy.Those hopes were dashed on Saturday when the Chilean team leading search and rescue efforts said that no one is alive under the rubble."Unfortunately, today, we can say there's no sign of life inside of the building," Francisco Lermanda, the head of Topos, Chilean rescue team told reporters at a news conference.Earlier, the search team thought they detected signs of life, but Lermanda explained that the respirations they heard came from their own team members, which they only learned after they checked the area."We detected breathing around 3 a.m., an exhalation. But after checking the area we realized that that exhalation was from our own rescue workers that had entered the first floor hours earlier. The device is very sensitive, therefore the minimal exhalation will be detected," he said.Riad Al Asad, the main Lebanese engineer working with the Chilean team, said three levels of the building were searched and no body — alive or dead — was found. The team will now search the sidewalk, which they estimate will take three hours, after which they will declare the operation over, Al Asad said.Lermanda told reporters that one of the last acts the rescue team did before reporting that no one is alive under the rubble was to dig a tunnel and inspect it. "We made a tunnel going down and our two women rescue (workers) went down due to their expertise and their size, so we can dismiss finally that there was nobody inside."The Topos Chile rescue team said they will conduct other operations in Beirut if the Lebanese government asks them to. "We would like to go everywhere, but we are respectful of the governments and of the people," Lermanda said. "If they ask us to go anywhere, to ground zero (the port) or to a building where someone disappeared, that's where we're going." 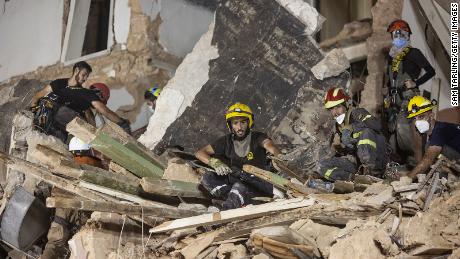 Earlier, members of the Lebanese civil defense told CNN that rescuers traced what they believed to be a heartbeat signal to locations under the debris but no survivors were found."We did not find anybody at the location where the machine detected," said one volunteer with the civil defense Qasem Khater.The search was sparked by a rescue dog that passed the destroyed building with the Chilean rescue team on Thursday and indicated signs of life, said Eddy Bitar, a local non-governmental organization worker.Thermal imaging later showed two bodies — one small body curled up next to a larger body. A listening device also registered a respiratory cycle of 18 breaths per minute, Bitar said.Rescue teams dug tunnels through thick concrete debris to reach the site. Lermanda had said he was cautious about the prospect of finding someone alive after so many days beneath the rubble. But he didn't rule it out. One person survived 28 days under rubble in Haiti, he added.

Tension at the site