Khalil says he ran away from home to join ISIS a year and a half ago. Today, he sits in a rehabilitation center in Syria's Aleppo province for former extremist fighters. At the age of 14, he's the youngest in his class.As a former child soldier, Khalil is classified as a "level 2" detainee — an active ISIS fighter.He's shy and struggles to find words to express himself, looking away sheepishly as we ask him about what he was thinking the first time he carried a gun in battle.He pauses, scratches his head and says, "I don't really have anything to tell you about this, I just wanted to advance. Just to advance. There is no retreat."At the center in Marea he is couched between battle-hardened fighters — some of them "level 3" detainees, foreign fighters mostly from Eastern Europe and Asia. It looks like a school classroom, but it sits inside a compound secured by the Free Syrian Army. The instructor at the front of the class is tearing into ISIS' ideology.The Turkish military presence here has created a bit of stability in this part of war-torn Syria. The Turkish military carried out Operation Euphrates Shield in late 2016 and early 2017 kicking out extremist groups in parts of Aleppo province. For years, parts of the province were overrun by some of the most extreme groups in the country, including al Qaeda and ISIS.The Syrian Center for Anti-Extremist Ideology opened just a few weeks ago. It is run by Syrian activists who have enlisted Muslim scholars, imams, lawyers and community leaders to help convince ISIS prisoners to drop their extremist ways. The Syrians who run this fledgling rehabilitation center say their work is crucial if there is to be a post-ISIS Syria."The most dangerous thing is the ISIS ideology," says the center's director, Hussein Nasser. "We want to teach them that the most sacred thing is freedom and human rights." 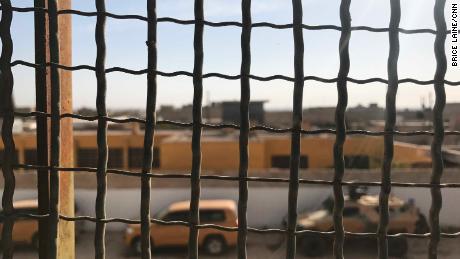 Both of Khalil's older brothers had also joined ISIS and were killed in battle. Khalil was ferried to the front lines along with a unit of children who served as little more than cannon fodder. He was shot on his first day in the trenches.At the rehabilitation center, the instructor draws on Islamic history, with some examples of seventh-century Muslims battles, and touts an Islam based on justice and coexistence.By lecturing almost entirely on Islam, he says he hopes to graduate a class of moderate Muslims who can be integrated into a society divorced from the more brutal realities ISIS created in their so-called Caliphate — that is once they have served their sentence imposed by the local judiciary."After you get out of here, reflect on everything. Don't lose your mind, don't let others manipulate it," says the lecturer who did not want to be named out of concerns for his own security. He stands in front of a five-row classroom of men, dressed in their uniform sweatshirts. Their look is a far cry from the Kalashnikov-wielding, bearded fighters in black uniform that these students were not too long ago.

A bulwark against Kurdish advances

Deradicalization is just a part of a highly complex battlefield. Turkey — in the areas it seeks to influence — wants to prove to the local residents that its patronage brings progress. In nearby Jarablus, the population has swelled to around 70,000 since ISIS withdrew in 2016 — more than three times its original size, its relative prosperity having attracted internally displaced families from around the country.In this town where ISIS displayed its brutal rule, sticking severed heads on display in the town square, there is now more construction than destruction. Thanks to ISIS' quick surrender, Jarablus was spared the devastation wrought on other parts of the country, but there is more to be done.Turkey supplies electricity and water to the town, and forks out salaries for the local police force. It also builds schools. Many children were deprived of formal education over the past six years, creating a breeding ground for ISIS to spread its doctrine among the young, like former child soldier Khalil.But Turkey's efforts serve its fundamental national interests. Turkey wants to secure its own border with Syria and keep them free of ISIS. It also wants to create a safe passage so that the three million Syrian refugees currently living in Turkey are free to return.Finally, Turkey believes that development will serve as a bulwark against the Syrian Kurdish advance. Turkey considers the YPG, which makes up the bulk of the US-backed Syrian Democratic Forces (SDF), a terrorist organization. Ankara also views the YPG as a thinly veiled version of the Kurdistan Workers' Party, or PKK, which has been fighting for independence from Turkey for more than three decades and has been blamed for deadly attacks in the country since a ceasefire crumbled last year.Even progress in a town like Jarablus is not guaranteed. Local commanders are concerned that the American policy of backing the predominantly Kurdish SDF to root out ISIS even in majority-Arab areas could create a situation that would allow extremism to flourish again."America needs to support the right people, it needs to support people from the area," Abdul Nassir, a captain with the Turkey-backed FSA, tells us. Abdul Nassir says this would be better than "backing the Kurds who have advanced into Arab lands." 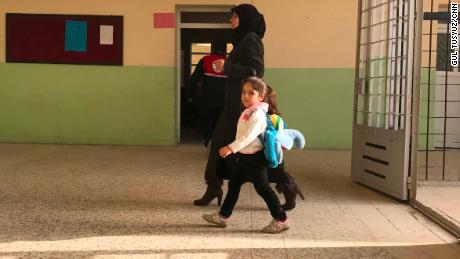 In both Syria and Iraq, US-backed Kurdish fighters have been instrumental in the fight against ISIS. In September, they swept through Raqqa, ISIS' seat of power since the dawn of the so-called Caliphate in 2014. Analysis: This one photo tells you all you need to know about SyriaISIS' deadly ideology has been scrubbed off the walls of the school building in Jarablus. In its place there are colorful murals along the corridors of a building that was once a prison and the training site of the Cubs of the Caliphate, the extremist group's youth wing. Children are crammed together, eager to learn. One of the school's directors says that it's vital for the students' mental health that they have spaces that can counterbalance the terror of war, where they can laugh rather than cower in fear. 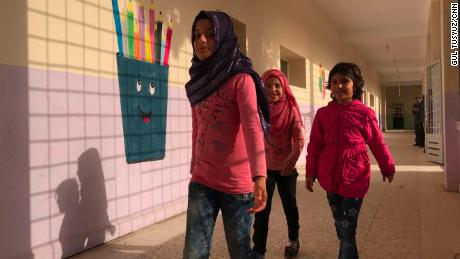 Five-year-old Wa'ed alternates between smiling and looking off into the distance as she tells us about her parents who abandoned her — her father fled with ISIS, and her mother followed shortly after. "After daddy left, she said to my granny, 'Will you take care of the kids?' and she left us," Wa'ed says.The story is a reminder that even as Turkey tries to pick up the pieces in Aleppo province through reintegration programs and infrastructure, the trauma of extremism and war will fester for a long time to come.