The coronavirus economy: How bad will it get?

Dont count on a vaccine to save the world economy.

In the early months of the coronavirus crisis, policymakers hoped for a V-shaped recovery — that the pandemic could be knocked down or suppressed, allowing economic activity to bounce back quickly.

Today, as countries around the world face a new surge in infections and contemplate the possibility of new, probably localized lockdowns, many economists expect things to get worse before they get better.

“It will certainly feel like a depression,” said Albert Edwards, the notoriously bearish strategist at the investment bank division of Société Générale who became famous for foreseeing the 2008 global financial crisis.

The global economy may have kinked up, for now, as countries have come blinking out of lockdown. But with no swift solution to the pandemic — the widespread deployment of a successful vaccine is months, if not years, away — the coronavirus will continue to be a drag on economies, as businesses shut their doors, workers lose their jobs and banks face rising levels of bad loans.

“The recovery will peter out, even if we dont tip into another outright recession because of unemployment,” said Edwards.

Global gross domestic product is estimated to have fallen by 15.6 percent in the first six months of the year, a drop four times greater than in 2008, according to the U.S. investment bank JPMorgan Chase. Some of that decline has already been recovered, but the International Monetary Fund predicts that the world economy will contract by 4.9 percent during the whole of 2020, even as governments begin to draw down support programs. GDP in the eurozone and the United Kingdom is predicted to drop by 10.2 percent this year, while the U.S. economy shrinks by 8 percent.

If the first stage of the coronavirus crisis was precipitated by state-mandated lockdowns, the coming months are likely to be characterized by consumer fear and government restrictions on industries like travel, tourism, entertainment, hospitality and retail.

Most experts, including those at the Bank of England and the European Central Bank, dont expect global output to recover to its pre-crisis levels until the end of 2021 — unless there is a major second wave of the virus this winter, and then all bets are off.

On Wednesday, EU market regulators warned that investors may be underestimating the risk of economic disappointment. Prices seem to have come untethered from economic reality, the European Securities and Markets Authority said.

The agency noted that European stocks have soared more than 40 percent since their coronavirus dive in March, even as some forecasts indicate that the Continents economy may not fully recover until 2023.

Take the example of an airport deli as an illustration of how a drop in demand in one area can make itself felt more broadly.

As wary travelers cancel their holidays, airport traffic slows. That causes business at the deli to plummet to the point where it cant cover its costs. After a few months, with no end to the problem in sight, the delis owners conclude they cant afford to wait for passengers to return.

The business declares bankruptcy, its employees are sacked and its suppliers find themselves with one less client. The airport struggles to rent the commercial space, and down the value chain, the distributors, vegetable growers, bakers, cheesemakers and butchers also see their revenues fall and need to make cuts.

Stories like this are playing out all over the world in countries where tourism is a key source of revenue. European ticketing data shows that airline companies sold less than one-fifth as many plane trips in August as they had a year before. Arrivals in Japan fell by 99.9 percent.

The next few months are likely to take an especially heavy toll on small businesses, as government support schemes are scaled back or come to an end. Bankruptcy rates could triple to 12 percent in 2020 from an average of 4 percent of small and medium enterprises before the pandemic, according to an analysis by the International Monetary Fund.

Economists are concerned that large companies are already announcing layoffs, even while furlough schemes and other forms of government support are still in place.

The redundancies include highly trained white-collar workers as well as less-skilled employees. The moves suggest that multinationals are reevaluating their long-term staffing needs beyond the pandemic, making a prolonged period of uncertainty and gloom more likely.

“Some companies think their business model has been permanently damaged by this,” said John Wraith, an economist with Swiss bank UBS. “Many casualties wont bounce back even if there is a medical breakthrough” such as a vaccine.

The eurozone saw 4.5 million people falling out of employment in the three months to June, at the height of the pandemic, according to official figures. In the Philippines, joblessness reached a record peak of 45.5 percent in July.

The United States saw unemployment peak at 14.7 percent in April, with the July rate standing at 10.2 percent. In the United Kingdom, large companies have announced more than 120,000 job cuts since the beginning of the crisis, according to data compiled by Sky News. The hardest-hit sectors were retail and aviation.

Theres likely more to come. The world can expect to be hit by “different waves of unemployment,” as closures, strategic changes and layoffs in one part of the economy force other companies to scale back or freeze hiring, said Gerard Lyons, an economist with Netwealth and former adviser to Boris Johnson when he was mayor of London.

Jobs in Londons city center are taking a hit, for example, after corporate giants like Schroders, HSBC and PwC announced plans to allow a large part, if not all, of their staff to continue to work from home indefinitely.

Office vacancy rates are expected to spike to highs not seen since 2008, leading to a 12 percent drop in rental income for owners of London office spaces and a steep decline in business for firms catering to the city centers daytime workers.

Lyons predicts the world economy will continue to recover slowly, making up its losses from the pandemic by the end of 2021, but he acknowledged the possibility of a second dip into recession next year is “a valid concern.”

Eyes on the banks

Downturns in the real economy tend to make themselves felt in the financial system, and the coronavirus crisis is unlikely to be an exception.

Laid-off workers struggle to find similar work as the slump affects entire sectors. Retraining takes time, and unemployment benefits are not enough to cover a mortgage or rent. As “debt holidays” expire, payments are missed and the banks reclassify loans as “nonperforming,” which could oblige them to be more conservative with future lending, creating a credit crunch.

During the early months of the pandemic, banks played an essential role in keeping the economy from crashing by providing state-guaranteed loans and allowing borrowers to defer repayments. But with much of this emergency action now wearing off, some insiders are saying that banks themselves will soon require state support. 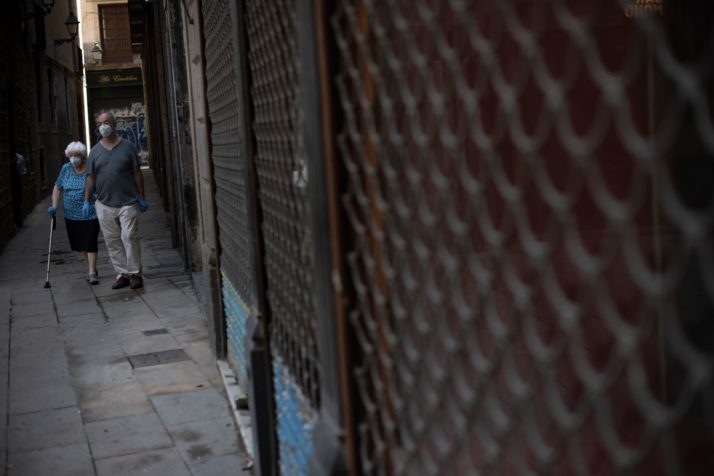 Regulators around the world are confident that there will be no repeat of 2008, when the largest banks were at risk of collapse because they had much smaller financial cushions. But this doesnt mean some smaller lenders wont need to be bailed out, or that they wont reduce the supply of credit in order to meet the capital requirements put in place in the aftermath of the financial crisis.

“I fear that indeed there will be a deceleration of credit supply, which by itself will contribute to a very sluggish recovery,” said Vítor Constâncio, a Portuguese economist who served as the European Central Banks vice president from 2010 to 2018.

“It can even become worse,” he said, warning that the EU might have to suspend its rules against bank bailouts with taxpayers money. A credit crunch would only materialize in the second half of next year and is still avoidable, he said.

Just what course the economy takes will depend on the pace of medical science in tackling the pandemic — and what measures governments take to blunt its effects.

Developing a vaccine will help, but it wont be the economic panacea policymakers are hoping for. “From the perspective of the global economy, the issue is not as simple as whether there is or isnt a vaccine,” said Neil Shearing, chief economist at Capital Economics in London.

Although there are six vaccines in the late stages of development, as well as the one being rolled out by Russia, Shearing said that none of them is likely to have a dramatic impact in 2021. Issues such as efficacy, speed of distribution, duration of effect and potential mutations in the virus are likely to make life with a jab not much different than without it, at least in the near term.

The U.K. in particular is showing signs of coming to terms with the fact that permanent damage is inevitable and a readjustment will be required.

Meanwhile, theres a limit to what governments can do.

Countries across the world have announced $11 trillion in aid measures to fight the pandemic, mostly financed with borrowing, according to the IMF — the equivalent of eight times Spains gross domestic product in 2019. Central banks have provided bilRead More – Source