"The Security Council expresses grave concern about reports of migrants being sold into slavery in Libya," the Security Council said."The Security Council condemns such actions as heinous abuses of human rights which may also amount to crimes against humanity. The Security Council calls upon all relevant authorities to investigate such activities without delay to bring the perpetrators to justice and hold those responsible to account."The statement, read by Japanese Ambassador to the UN Koro Bessho, comes weeks after undercover CNN reporters witnessed a dozen men being sold at auction outside Libya's capital of Tripoli.Many of those being sold were migrants like Victory, a 21-year-old man who had fled Nigeria in an attempt to reach Europe in search of a better life. But he made it as far as Libya when his funds ran out, he said, and smugglers sold him as a day laborer to make him pay back his debt.The smugglers abused and mistreated Victory and other would-be migrants, and they demanded ransom payments from his family before releasing him.CNN's reporting spurred a harsh backlash in Africa and in Europe, and led to protests outside the Libyan Embassy in Paris. Libyan authorities promised an investigation into the practice, and a number of political leaders offered calls for action to stop the practice.In particular, UN Secretary-General Antonio Guterres said he was horrified by the reports and said they may amount to crimes against humanity."I abhor these appalling acts and call upon all competent authorities to investigate these activities without delay and to bring the perpetrators to justice," Guterres said. "I have asked the relevant United Nations actors to actively pursue this matter."Last week, a UN panel of experts said it was "extremely disturbed" by the images from Libya and urged the country to take "urgent action" to end its slave trade. 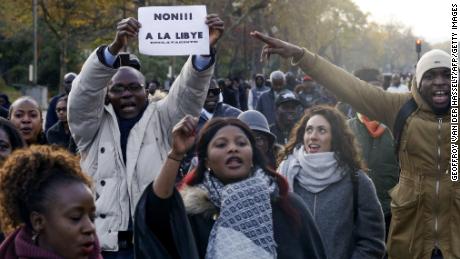 On Thursday, the UN Security Council said it welcomes the statements from various political groups condemning the matter and promising to investigate. The council also focused on the desperate migrants affected by Libya's slave trade."The Security Council further underlines the need for coordination of efforts to tackle the root causes of large movements of people, including forced displacement, unmanaged migration and trafficking in persons, in a comprehensive and holistic manner, to prevent exploitation of refugees and migrants by smugglers and human traffickers, as well as for implementation of the 2030 agenda."US Ambassador to the UN Nikki Haley said the United States strongly supports the Security Council's action to call attention to the atrocities, investigate the perpetrators, and care for the victims."It's critical for the Security Council ‎to speak up when human rights abuses threaten the lives of innocent civilians. Reports that people escaping violence are being sold into slavery in Libya are horrifying," Haley said. "All countries must do everything they can to end this barbaric practice. Until that time, those committing these unspeakable crimes must be brought to justice, and the victims must be treated with the respect and dignity that they deserve."

CNN's Richard Roth and Kristina Sgueglia contributed to this report.

EU rules Uber is transport service – not just an app

Call on HSBC to stop supporting the arms trade with Israel

Call on HSBC to stop supporting the arms trade with Israel