With Macron’s visit to Beirut, Lebanon’s future is looking a lot like the past

President Emmanuel Macron toured neighborhoods where Lebanese officials have been personae non gratae, embraced activists who have called for the downfall of the Lebanese establishment and even had dinner with the singer Fairuz, the single most popular Lebanese cultural icon who has for decades shunned the country's political leadership.It was beginning to feel a lot like 1920. Back then, General Henri Gouraud declared a new Lebanese state whose first Prime Minister would be Auguste Adib. Macron on Tuesday says he wants to usher in a new "political chapter" and has sponsored a political process that led to the naming of a new Prime Minister-designate named Mustapha Adib.The two Adibs appear not to be related. Still, the optics have been dizzying. Even for a country notorious for being subject to heavy external interference, Macron's tour of Lebanon has been extraordinary. In one fell swoop, he seemed to stand in for Lebanon's despised leadership, and it has aroused mixed feelings. During months of economic spiral that saw the local currency tank, poverty rates soar and the banking sector teeter on the verge of collapse, people in Lebanon decried the absence of leadership, accusing the political elite of plundering what little resources were left in the country. An explosion that laid waste to large swathes of the capital on August 4 seemed to ring the death knell of the state. Fearing the collapse of the tiny eastern Mediterranean country, the international community quickly stepped in. It was a stunning volte-face. In recent months, world leaders repeatedly proclaimed Lebanon's political system untouchable, refusing to deal with the corrupt leadership amidst the country's economic downfall. This came after nearly a decade of the international community flushing Lebanese coffers with money in exchange for hosting the largest number of refugees per capita in the world. Macron was in Beirut within days of the explosion, followed by the French minister of armed forces. US Undersecretary of State David Hale also paid a visit to Lebanon, coinciding with Iranian Foreign Minister Javad Zarif's own tour of the country. High-level representatives from the UK, Turkey, and various EU countries also visited the damaged city. 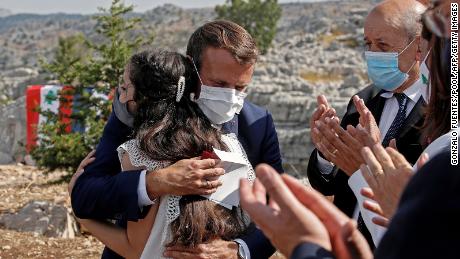 Suddenly the Lebanese aren't feeling abandoned, and Macron seems to be saying all tRead More – Source

Thameen Al Kheetan at the French Ambassador’s residence in Beirut

Thameen Al Kheetan at the French Ambassador’s residence in Beirut